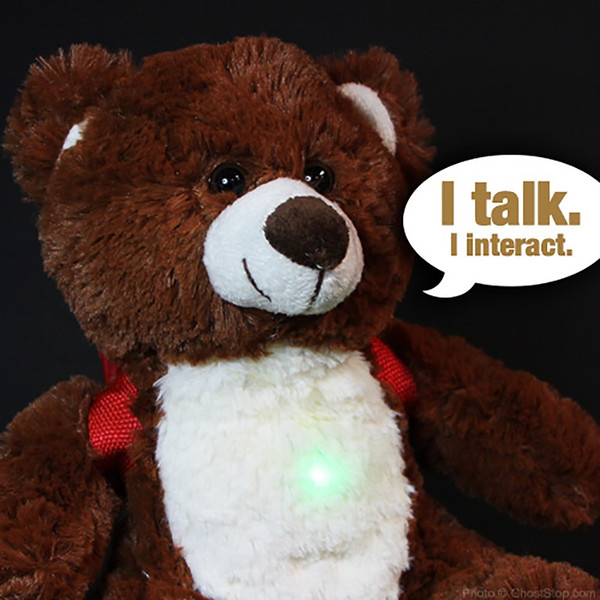 The talking bear every investigator wants on their team.

It may steal your heart like the others do, but BooBuddy is not your average teddy bear! In fact, that adorable face is only half as endearing as the collaborative spirit that BooBuddy boasts. For a limited time, we are making a few of this product in a snow white that looks super cool. All functions are the same. See our Blizzard Collection of other limited edition products.

Referred to by some as Boo Bear, this sophisticated device is more than just a stuffed animal with a cute name and an EMF meter inside. This talking interactive bear can ask questions and reacts to the changing environment. Soon, you’ll be deputizing the cutie as an official investigator bear on your ghost hunting team. 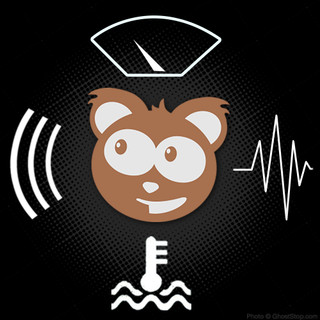 What does this ghost bear bring to the team?

Children may love it, but this is definitely not a toy. This boo bear’s mission is to investigate the paranormal with us, by promoting positive responses and informing us when the environment changes.

BooBuddy asks EVP questions in order to trigger a response. If there’s an effect (EMF, motion, temperature) BooBuddy will respond appropriately — with flashing lights or an adorable voice — indicating that we may not be alone.

Just set BooBuddy down and turn it on to detect environmental changes and start the interview process. Make sure to set a voice recorder or camcorder near the doll to document any potential responses.

A Bear with Real Tools for the Job.

There are some ‘toys’ out on the market that are not much more than a K2 meter or REM Pod sewn inside. They’ll sometimes be referred to as a Rem bear or EMF bear.

BooBuddy Junior, the first version of our bear, built for this purpose but far less influenced by outside interference than those bears with a K2 or Rem shoved inside. However, BooBuddy has grown up now into BooBuddy Interactive – the evolution that adds SO MUCH MORE to love.

Benefits of Recruiting BooBuddy to Your Team

When it comes to ghost hunting and paranormal investigations, some theories suggest that using an object that’s familiar and attractive to an entity may entice them to interact. Teddy bears have been a popular toy for over a century, they’re disarming and inviting, and the BooBuddy interactive bear is packed with features that are vital for any investigation.

Whether you choose ghost hunting bear or opt to recruit another human ghost hunter, you’ll need someone on your team that tracks data and completes critical tasks like:

While some people call this ‘boo bear’, most give it their own name. Give the bear a name and make it part of your team. We’ve heard some clever names like Beary Potter and Bubba Bear to Gangster Boo, coined by the boys on Discovery+ Ghost Brothers TV show.

Eventually, everybody has to grow up. From our older model, BooBuddy Junior, to the grown-up version you know and love today, we never stop improving the designs of our ghost hunting equipment.

To that end, these are the newest feature updates for BooBuddy:

Volume Control for when BooBuddy gets Too Excited

We’ve added an optional volume control. With one knob, you can click on BooBuddy and turn to adjust the volume as you wish.

Turning it all the way down will mute all speech.

In order to save batteries, we’ve made our boo bear rechargeable via USB. With a battery life of over 35 hours, you can go mobile, plug it into a wall outlet, or connect it to a USB battery pack for continuous use — even while charging!

When the battery is drained, just plug it into any USB outlet for a fresh start.

Louder Voice & Quicker Response Time for when BooBuddy gets Too Timid

The previous model would wait 40 seconds before providing any response, then it would make a determination about what phrase was appropriate. Now, that window is interrupted to provide an immediate response, but with a period afterwards to allow for potential EVP responses in a more timely manner.

If nothing happens, BooBuddy will revert back to a 30-second window before asking a new trigger question.

All new and built for ghost hunting, this ghost teddy bear can provide almost 40 questions and voice responses, such as:

This is the newest model of BooBuddy, which has been custom built here at GhostStop just for paranormal investigations. This is not your typical EMF meter or thermometer installed into a bear; it’s a custom-designed tool for investigators that’s borne from years of development and investigative experience.

With this, BooBuddy came to life as a mature investigator. To recruit Boo Bear onto your paranormal investigation team for the next ghost hunt, reach out to our team today.

MADE IN THE USA from domestic and imported material.
This product is made right here at GhostStop. ovilus

When no change in environment, these are the EVP questions: