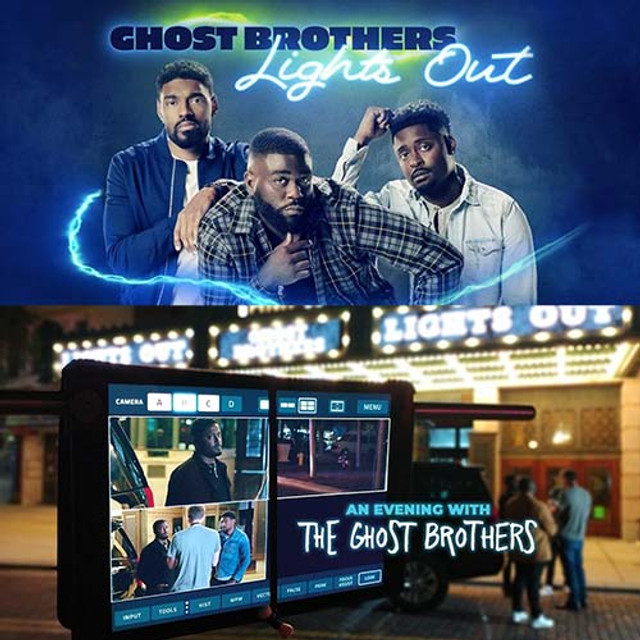 Come join us Oct 26th, 2022 for an advanced screening of Ghost Brothers: Lights Out before it airs.

Watch this new episode from the seats of the very theater it was filmed in. Following the screening, there will be a Q&A panel with Dalen, Juwan and Marcus, stars of Ghost Brothers. We'll also hear from the theater staff and other investigators involved in the episode.

Psst... you might even see a familiar GhostStop face with new gear and an experiment fit for the big screen. Just sayin'.

The episode with air to the public later that week on Travel Channel and streaming on Discover+.

Dalen Spratt, Juwan Mass and Marcus Harvey cross the velvet rope to the other side at the historically haunted Tampa Theatre. As the eerie experiences pile up in this menacing movie house, the guys step into the spotlight to confront the source of the disturbing activity.

The Ghost Brothers are back on the haunt with the much anticipated second season ofGHOST BROTHERS: LIGHTS OUT on Discovery+. Joining the Ghostober programming line-up, Dalen Spratt, Juwan Mass and Marcus Harvey flip the switch on paranormal lore by shining their own light on its darkest secrets. These candid and unorthodox paranormal investigators explore iconic haunted hotspots to find out if the legends are really true and if these places are still plagued by the horror of the events that occurred there. They are ready to expose the haunted holdouts hanging around these locations with unconventional experiments. The eight one-hour episodes ofGHOST BROTHERS: LIGHTS OUT premiere on discovery+ with a terrifying three-episode binge on Friday, October 7, and then a weekly episodic rollout on Fridays.