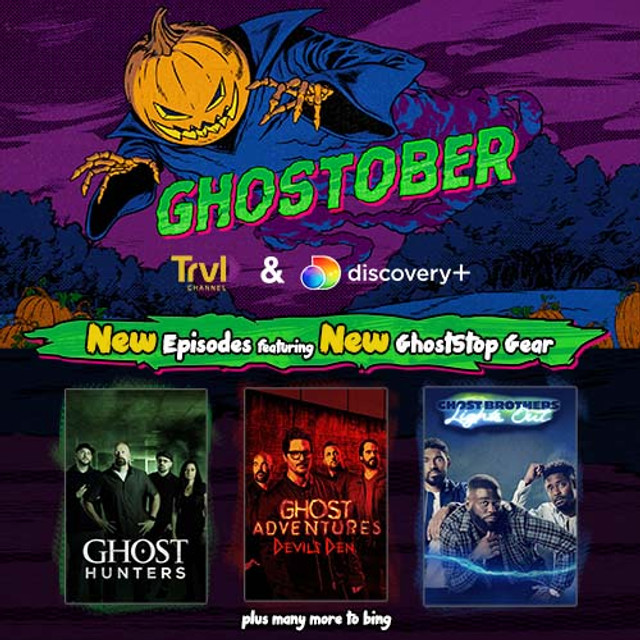 Stay tuned all October long and get a peek at the newest GhostStop gear in action.

Travel Channel and Discovery+ streaming service have all new episodes of your favorite shows awaiting you all October long. From special ghost hunting episodes, scary films to paranormal documentaries, you'll be served up a chilling dish of hauntingly spectacular content.

So, grab the popcorn, click on the tube and enjoy all over your favorites with treats in store.

You're sure to see a cornucopia of new ghost hunting equipment in action along with never-before-attempted experiments fit for the big screen.

The month-long event will see the return of the most popular series Ghost Hunters with Jason Hawes, Steve Gonsalves, Dave Tango and Shari DeBenedetti - back with a brand-new season of investigations. Also catch a few familiar faces from TAPS including Amy Bruni, Adam Berry, Dustin Pari, Kris Williams and many more.

Pop the trunk on season 2 of Ghost Brothers: Lights Out starring Dalen Spratt, Juwan Mass and Marcus Harvey investigating some of the most notorious locations along with a few new stomping grounds.

Also join the Ghost Adventures crew and its paranormal investigation team composed of Zak Bagans, Aaron Goodwin, Billy Tolley and Jay Wasley for some of the most wicked investigations they've encountered.

“Ghostober,” the multi-platform spooky television event, is returning this year with more than 55 hours of new series, specials and returning shows for the Halloween season.