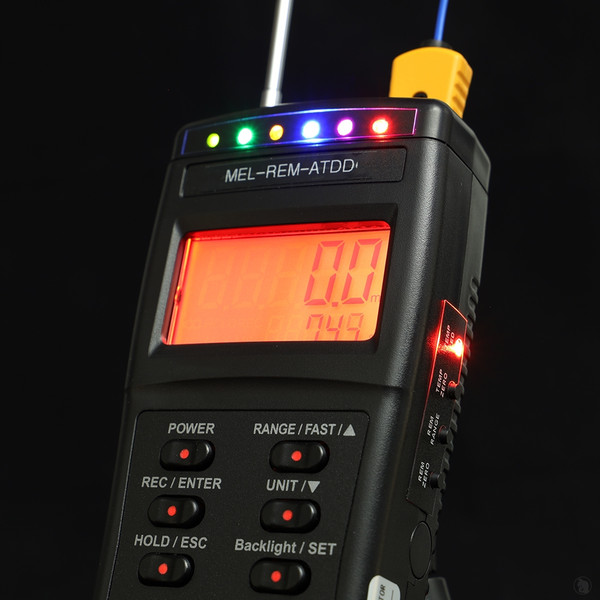 In addition to detecting 'Natural' and man-made EMF frequencies (AC/DC) & ambient temperature changes in the environment, this new feature also uses a mini telescopic antenna to radiate its own independent magnetic field around the instrument. This EM field can be easily influenced by materials and objects that conduct electricity. Based on source proximity, strength and EM field distortion... four Multi-Colored LED lights can be activated in any order or combination. This device also includes our popular ATDD (Ambient Temperature Deviation Detection) unit that detects and alerts you to ambient temperature changes with an audio tone. If the temperature drops, a lower tone is heard and if the temperature rises the tone is heard with a higher pitch alert. This is very helpful in detecting environmental changes without staring at the unit all night.

We are an official distributor of the Mel Meter. Your product comes with support and is protected by manufacturer warranty.

ELF Range down to 30Hz! Night Vision Safe, High Intensity Red Flashlight & Red Backlight Multi-Colored REM-ATDD LED Lights Built in ATDD (Ambient Temperature Deviation Detection) with audible tone alerts Custom Dual Display Correlates EMF & Temperature Cold Spots Simultaneously! Custom Glow-In-The-Dark Push Buttons. A 30 sec. Charge from Your Flashlight Lasts 3 Hours! Super Bright Custom Red "Night view" Display with On/Off Button Fast Response Type "K" Thermocouple Temperature Sensor for Ambient Temperature Readings Record Feature Captures Min & Max Values
EMF Measurement 1) Power On the meter by pressing the " Power Button " once for 3 seconds. 2) With the tester in hand, move slowly towards to the object under measurement until it is physically touched. The upper Display will present the EMF measurement value. 3) Position the EMF tester at different angles to the object under measurement and observe how this may affect your reading. 4) By trying different angles approaching the object under measurement, record the highest value shown on the display. Temperature Measurement 1) Insert the " Temp. probe plug " into the " Temp. probe socket " 2) Power on the meter by pressing the " Power button " once for 3 seconds. 3) The lower right Display will show the temperature value sensing from the probe's head. In addition to the basic Mel Meter operating characteristics, it combines the Radiating Electromagnetic (REM) function which radiates an independent Electromagnetic (EM) field around the mini telescopic antenna and the Ambient Temperature Deviation Detection (ATDD) circuit for hot and cold spot detection. The ATDD will produce a one octave step tone for each degree change over a ±5 degree range. REM: The Mel-8704R-REM has been designed with a separate function which radiates an independent EM field around the top of the unit. It is believed that spirit energy can manipulate, distort and influence such an EM field. To activate the REM feature, simply gently pull out the silver telescopic antenna and press in the REM button located under the tilt stand on the back of the Mel meter. The five LED lights on the front of the device (Green, Yellow, Blue, Pink & Red) will also blink twice as they go through their diagnostic routine. This verifies that the system is working correctly. To test the EM field, move your hand around the antenna area, then touch the top of the device. All lights will be illuminated as the EM field is interrupted. There is also a specific tone associated with each LED. It is important to note that there could be some interference of the EM field when the device is within certain proximity of fluorescent lights or a high power handheld radio frequency communication device. Also, be aware that once the REM power has been activated, it will remain powered until you turn it OFF. Be sure to turn it OFF when not in use to preserve your battery power. The REM feature has an automatic “zero” or baseline function. This will activate after 5 seconds only if the amount of REM field interruption (energy) is in a steady state or not fluctuating. If the field interruption or source is continuously changing or undulating, the circuit will not baseline. This is important because it will help to validate that there is a dynamic or moving energy field interrupting the REM field around the device. IMPORTANT: Do not attempt to open this device. It will disturb the calibration of the REM field. Do not touch the screws that hold the case together as they could alter specific stress points on the main circuit boards. ATDD: To activate the ATDD circuit, push the power button located behind the tilt stand. Please note, the REM circuit must also be on for the ATDD circuit to turn on. Once activated, the ATDD will do a quick diagnostic check and the ATDD circuit will baseline to the environment ambient temperature conditions. There is also a baseline momentary button located on the right side of the Mel that allows you to baseline at anytime should there be a natural or gradual temperature change in the environment.